One of the two reasons why I released as early as I did is because I wanted to start getting feedback as soon as I can. That has been absolute magic. My good friend Andrew Piccardo (AndyNardo on The Beer Stash) had a few suggestions for me today, so three usability changes star in tonight’s update:

The tab on the right has been replaced with a link in the footer which takes you to the Feedback form. If you have anything to say, feel free to use it! This tab was extremely annoying on iOS devices. 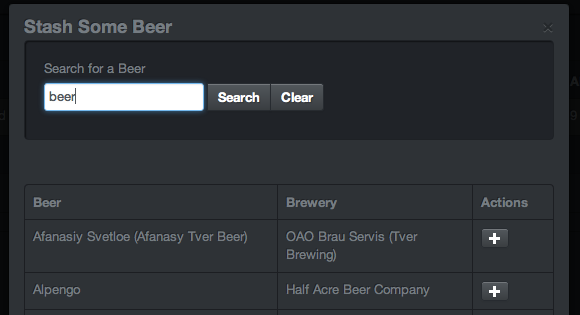 This was a no-brainer. I don’t know how I forgot it. As part of this change, the search form gets a face lift. The ordering of the search results are switched too. Before it was Brewery and Beer. That didn’t make sense. So now they are in what I think the proper order is.

You can’t really tell but clicking the headers Beer, Brewery etc.. sorts that column. It is actually pretty poorly done right now. There is no visible indication of which column is sorted. That will be fixed in a later release. I may default to sorting by beer name next time too. As another part of this update, the ordering of the columns were changed here too as well as header name updates.

As always, let me know if something doesn’t work.